Home » FranklinCovey Blog » What Are You Missing Because of Fear?
× Share this Article

Most of us have been taught all our lives to face our fears. Or avoid them outright.

My mother is deathly afraid of sharks. It’s a debilitating fear for her, so much so that she resisted joining my three sons and I at an aquarium because of its shark encounter. When we finally convinced her to join us, she was visibly shaken and reverted to childlike behavior when she even saw the doorway leading to the wing that contained the sharks. My mother won’t look at books that contain photos of sharks, refuses to watch television programs that involve sharks, and closes her eyes during commercials about sharks. As a joke, I once sent her a postcard with a shark on it. Got an earful after that prank!

Ask me how many encounters my mother has had with a shark. Now mind you, she’s lived in Florida for 60 years, so there are lots of sharks around.

How many sharks has she seen?

ZERO! Never touched one, seen one, or been anywhere near one (that she knows). It’s a fear she’s never faced or felt.

It’s fairly irrational given she has zero experience with sharks and doesn’t know anyone who has.

Here’s the more interesting part. I share the same fear. Completely irrational. I detest sharks so much I won’t go into the ocean above my knees. I also won’t allow my sons to either. My mother created a lifelong fear in me, and I’ve done the same, unintentionally, with my sons.

My fear of sharks keeps me out of lakes, rivers, and oceans. Generally off boats of most kinds, certainly those in the ocean that might encounter a…dare I say it…shark.

So I’m relegated to pools. And I fear my boys will be also.

Wonder what would be different if I chose to feel the fear, and not just face it.

What am I missing in life (beyond the ocean) because I’ve not faced or felt the fear?

Now that you’re thinking about fear, don’t let it cause you to miss anything else. Watch my latest On Leadership interview with Kristen Ulmer, the best female big mountain extreme skier in the world (a record she kept for 12 years). Kristen is a fear and anxiety expert and her insights will help you navigate this deeply misunderstood emotion.

Are you a senior leader faced with implementing a must-win initiative in the shortest amount of time, yet requiring maximum employee engagement? Download our latest guide to execute your strategic goals and create breakthrough results.

Everyone’s got a story. And rarely do we know it. Scott Miller explores the role that appearance-based judg...

Take a proactive approach to things that will cause you to react. Start by thinking very carefully about wh... 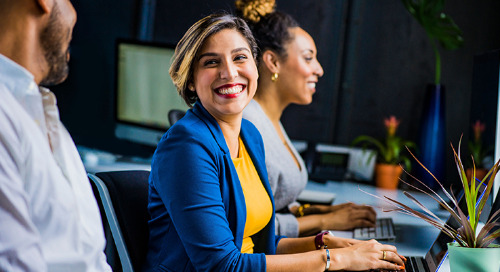